Not sure why this hasn’t happened before now but finally a Road Trip to the Desert Southwest got scheduled.  The plan is to depart Gig Harbor, Washington for points south and east toward southeastern Idaho then south towards Arches, Moab and The CanyonLands, Utah; The Mesa Verde in Colorado and on to Crown King, Arizona

before heading south of the border to Puerto Penasco, Mexico.  From Mexico a short return trip to Phoenix, Arizona to meet some friends, drop off the car and fly home.

As the day to leave got closer, the packing and “to do” list grew with all the small conveniences that are handy to have but you can live with out and things to do and get done.  Sometimes the getting ready for, the planning and thinking about it is as much fun as the trip itself.

The trip begins and great weather waited for us on the majority of the trip but it did start out a little stormy.  Once through this part of Idaho and shortly after arriving in Utah the weather cleared and the landscape opened up to reveal the beauty of the Canyonlands.

Mark, my best friend and travel companion, approached this trip with a feeling of relaxation, no schedule and no specific agenda other than knowing we had a return flight to catch from Phoenix, AZ in 11 days.  So we had enough time to see and do what we wanted at a relaxed pace.  Well, mostly relaxed, we did encounter one day that was far, far less than relaxed and in fact had us fearing for our lives.  More on that later.

The Canyonlands area of Utah is stunning.  The color, the geology and the feeling you get standing and being amongst these colossal and ancient formations is overwhelming.  Photographing them is awesome but doesn’t reveal the magnificence of this place.  It’s a must see if you can.

From the Canyonlands and the Grand Canyon we continued south to Arizona, through Monument Valley, the Painted Desert and to Jerome, Arizona.  Jerome is another place that hopefully can make it on your list of must see places.  Really cool location, great history, nicely preserved with good food and accommodations.  The day after our stay in Jerome we decided to travel to Crown King, Arizona.  A place where my friend Mark had visited quite a few years before and wanted to see once again.  Crown King is in the mountains and hills south of Prescott with only two ways to reach it by road.

I’ll just say, the easy road and the road absolutely no one should or does use, Senator Road.  Except for us and we decided to ignore all the verbal warnings from people we spoke to about getting there and as if that wasn’t enough we decided to also ignore all the Arizona State signs warning that this was a dangerous road, un-maintained road and only for “high centered” vehicles.  Of course we’re driving a Lexus GS with about 7″ ground clearance, but Mark decided that all that warning stuff was to just discourage the use of the road. Well, yes, it was the point, but we elected to ignore the warnings and take Senator Road.

That was a mistake.  Thirty three miles to Crown King on the “correct” road would have put us there in about an hour, but this short cut that Mark knew of might get us there a little sooner.  It took us 5 hours to go the 33 miles.  But the fact that we got there at all is whats remarkable.  And, to the wonderful folks of Crown King (population 30), they could not believe that we made it at all and especially in a Lexus Sport, which then brought several of the town folks by to see the two ‘city boys’ that just came over Senator Road in a Lexus.  Yes, we were offered up as the laugh of the day.  But these kind people were instantly available to help us with our flat tires and a place to stay. 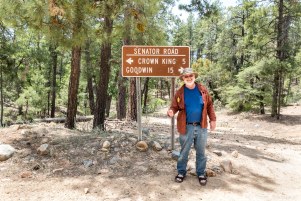 Mark, happy to be alive and only 5 more miles

This is an easy stretch

The Lexus, the wonderful Lexus that got us there. 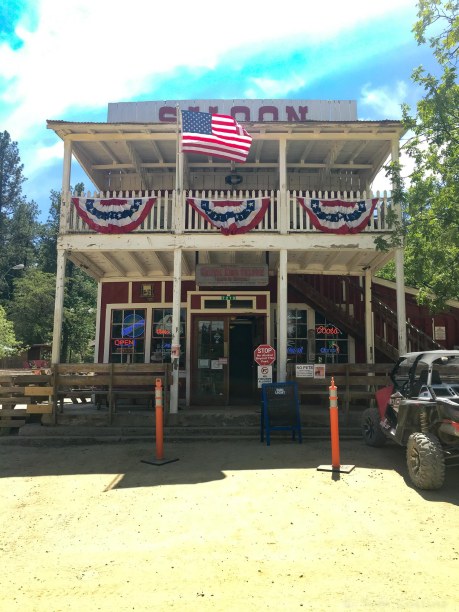 We moved on from here to Phoenix where we spent one night before continuing on to Puerto Penasco, Mexico, aka Rocky Point.  I have to say I didn’t think much of the town of Puerto Penasco, but the beach was beautiful.  Miles of sandy beach and warm water in the Gulf of California.

Mark in a small cabana to escape the 105 degree heat 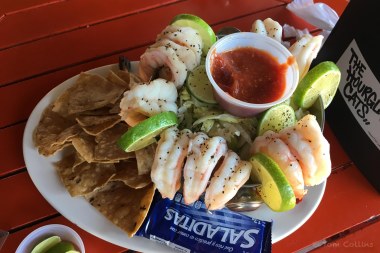 From here back to Phoenix to meet up with family and friends, turn the Lexus over to family and jump on a flight back home.

11 days, 6 states, 2 countries and 2,628 miles.  It was a great trip.  Would we do it again?  Absolutely.  Maybe take a little more time and for sure pay more attention to warning signs.

For more pictures from this trip go to;  Photos from The Desert Southwest Road Trip

I'm a casual photographer living in the Pacific Northwest. I'm not disciplined in any specific photography genre but rather enjoy documenting the life and stories of friends, strangers, family and travels. I am an amateur at best but devoted at the deepest levels. I like all types of photography but find interesting, story telling photographs to be my favorites. View all posts by Tom Collins